The Moving Parts of Your Garage Door 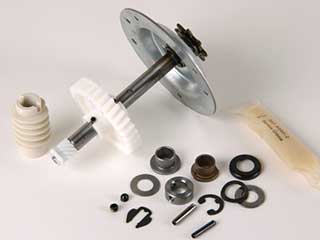 Garage door motors are designed to last for a specific amount of time but usually wear out around their 14,000th operation. Most of the time, there's no audible sound of something breaking or snapping. There may be trouble opening the doors or they may open half way and get stuck. This is a sign that the door has ceased working. Most people assume rusted gears or faulty equipment are the culprits, although this is usually just an old door. Garage doors aren't meant to last forever and the important components wear down over a period of time. If you've ever wondered how it all works, especially if planning on doing some garage door repair, read on below for information on the components.

The operator is the portion of the garage door that powers, analyses and motorizes movement. The motor is usually around one horsepower with six amps screwed into a 120 volt socket. The motors and gears are one crucial component in this myriad of garage door parts and rely on the specs mentioned above. Following the motor, you also have the drive guide. This is the track (sometimes referred to a T-rail) that shields things like the belt, chain and or screws as the door moves up or down. Its connection is a bridge to the trolley, which is also connected to the door itself.

The battery and the inverter usually convert the power source into direct current (DC) to save on energy and allow for smaller, more form-fitting garage door operators. In turn, it also charges a battery as a backup in case the AC power goes out, that way you can still get inside during an emergency situation. Most modern garage door operators have a backup battery built in.

Mechanisms of an Operator's Drive

There are several important components and mechanisms that are part of the drive. In addition, there are also several options regarding which mechanisms to pick, these being the parts that actually connect to the door and pull it up. The oldest one is similar to a bike chain and is called a chain. They sit about half an inch to the bottom of the T-rail. However, they're known to make a significant amount of noise.  The other option is a belt, which is the quietest but also the loudest. It uses a Kevlar material and is molded in a way that supports gear-like teeth. The final option is a continuous screw or threaded shaft that connects the trolley to the garage door operator. Twice a year, lubricate them unless you want to risk destroying it. It's the middle-ground of the three common mechanisms. They're all cheap in comparison to a brand new operator, but take into consideration the various needs for your home and family.

Have any questions? We can help! Please leave your contact information below and we will get in touch as soon as possible.

Our professional team is where you should look for the finest quality repairs at budget prices. We offer dependable, same-day service and guaranteed customer satisfaction!

* $29 service call - deducted from the service

Please fill in your details below:

The appointment was scheduled successfully!

Our technician will contact you before arriving. Until then, feel free to browse our website! Garage Door Repair Tampa is at your service!